It eventually happens to everyone. It may have happened to you already, maybe not. But somehow, someday, every Bimmerphile finds themself in a place where they realize; “I have to have this car”. And soon after, you have “your favorite car”. It’s an exciting time for everyone, no matter what the car is. You feel like you’re on top of the world–whether you’re buzzing through the twisties of the Natchez Trace with the top down, or just driving to work. Some of us car lovers become a bit obsessed and think that this is the greatest day of our lives. We find it hard to fall asleep at night without running out to the garage at least once to flip on the light to get one more peek. For a BMW lover, there’s nothing better than buying a car you’ll really enjoy, except maybe….. Buying TWO. Jay Lilley got serious about his career in the automotive industry in 1971, starting as a trainee mechanic at a Rolls Royce/Aston Martin/BMW dealership. Jay admits that at the time he was really only interested in the RollsRoyces. He quickly became the youngest fully certified Rolls-Royce technician in the United States. During his time at the dealership he drove some 2002’s and Bavaria’s, he remembers; “They were just amazing! – They did everything you’d ever want a small car to do… They could accelerate, handle, everything…just amazing”. Since then Jay has become a full-on advocate for the BMW marque and seems to be gaining speed – literally. In early 1997, Jay was excited to test drive the very first 6 cylinder Z3’s and he recalls that day vividly; “The first time I drove it I knew I had to have it”. And have it he did. In fact he bought one of the very first models off the production line! The 2.8 liter engine made the BMW Z3 a new car all over again with it’s new found power. But Jay could not “leave wellenough alone” as we say here in Tennessee. He began a series of upgrades that can be best described as ///Jay Power. Over the last 31 years Jay has learned a thing or two about BMWs, and one drive around the block in this Z3 will prove it. Jay has increased the airflow in the engine from the intake to the exhaust. It starts with a K&N air filter connected to a Dinan carbon fiber cold air intake which leads to the European “oversized” mass air meter and an oversized throttle body. 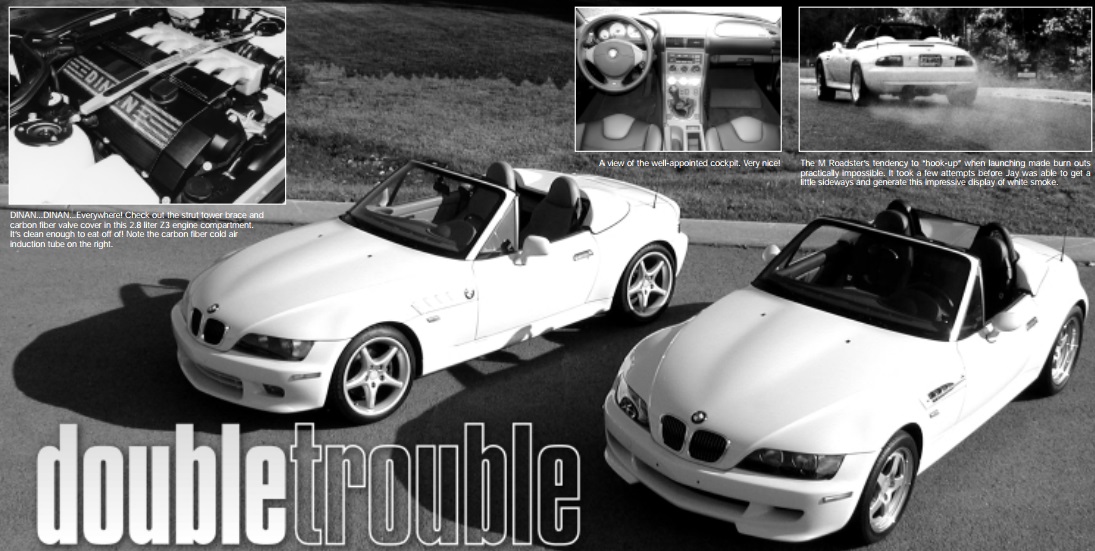 Next, he replaced the stock intake manifold with a Schrick – but it doesn’t stop there, the Schrick intake has been honed and glassbead polished for maximum air flow. This intake is port matched to the 2.8 motor’s head, which has been honed and polished as well receiving a CNC “SERTI” three angle valve job. In addition to this, Jay has removed the traction-control butterfly valve and fitted an electronic fuel mixture control. All this new air getting into the engine won’t really work to it’s full potential without having a way to get it out. That’s why Jay used a SuperSprint exhaust header and resonator which replaces the catalytic converter. Custom oxygen sensor mounts have been fitted and a Dinan “cat-back” exhaust and muffler offers performance, style and sound. To get even more response from the engine, Jay has used an aluminium flywheel and an ERT Power Pulley. This reduces reciprocating mass in the front and rear of the engine making it rev up very fast. Highly responsive is an understatement. The engine sings. Jay has not taken the car to be professionally Dyno tested, but one thing is for sure: the butt dyno does not lie – this car flies! Power is transferred to the road through a new Limited-Slip 3.23 differential with an M Roadster diff-cover. Jay got clever and fitted an M roadster shift lever in place of the stock Z3 lever, greatly reducing shift throw and having the same effect as a “short-shift kit”. Believe it or not, Jay doesn’t think horsepower is everything. Handling is important too. He has a Dinan stage III suspension which includes Springs, Koni adjustable shocks and struts, front and rear anti-roll bars, as well as front camber plates and a carbon fiber/aluminium strut-tower brace. Jay has put huge 8.5″ X 18″ Dinan wheels with massive Michelin tires for maximun traction. All this keeps the car handling like a go-kart. You didn’t think he would leave the brakes untouched, did you? The fronts spindles have been converted to M3 parts allowing for larger slotted rotors and calipers. He has stainless steel braided brake lines and EBC Green Stuff pads which make stopping this monster seem like a breeze. The icing on the cake is the subtle yet stylish visual enhancements and accessories that Jay has added. Notice the speedster cover behind the seats, the rear lip spoiler, the painted grillework in the front air-dam, the euro white light conversion, the wooden steering wheel and e-brake handle, and don’t forget the sport seats. There’s a glorious display of carbon fiber under the hood on the aforementioned cold-air intake and struttower brace, as well as a carbon fiber valve cover and injector rail cover. I’ll cut right to it- The car is awesome. Driving it is sensational. The engine is so responsive and strong, gemutlichkeit it’s wonderful to press into the gas and just feel yourself being pressed into the seat. The large tires, limited slip differential and well-balanced suspension make it difficult to spin the rear tires, the car just leaps out of the gate and doesn’t stop pulling! The suspension is supple yet firm, making for a pleasant ride while daily driving, but ready to dance when you want to play. The brakes are excellent and will stop the car quicker than you think. This little Z begs to be driven and Jay Lilley takes care of that alright! Good thing it’s got an integrated K40 radar detector- he’ll need it in this car. So you’re thinking “Wow, it’s the ultimate Z3” …. “It’s the greatest”. And to Jay Lilley it is too. It’s his favorite Bimmer, the one he checks in the garage before he goes to bed at night. But a few months ago, something happened. If you don’t already know, you’ll never believe me when I tell you that Jay jumped off the deep end and bought a 2001 M Roadster. “Oh-my-gosh! Another one!” Is this a dream or what!? Twin, white, Z3’s. One modified to perfection, the other born perfect. When I was thinking the 2.8 was the most amazing car, Jay pulls the ace out of his sleeve and steals the show. The new M Roadster has the S54 engine, Motorsports’ latest evolution of the straight 6 motor. It has 315 horsepower, massive brakes and four exhaust pipes! Anyone with two cars this awesome must have a permanent smile fixed on their face. Seriously. I can’t tell you how much fun it was going out on this photo shoot. Bert, Jay and myself were like three kids in a candy store with an all day pass. We switched driving the two cars and took some time out in the backroads of Brentwood, Tennessee. The M Roadster has huge reserves of power and elicits a smile everytime the gas pedal is depressed, the handling is very good, although not as crisp as Jay’s custom setup on the 2.8. The brakes are simply astounding. They slow the car so powerfully, you feel G forces you’ve never felt before. Slowing down has never been so much fun. You can really have a blast with this convertible, accelerate hard and then press into the brakes, accelerate some more, and stop again! What fun! How could one possibly choose a car to drive to work? A ride in the 2.8 makes you want to drive the M. Tool around in the M for a bit and you’ll find yourself wanting to try the 2.8 again. The cycle goes on endlessly! Jay has just begun the process of improving the M Roadster. So far he has added Dinan wheels and a white light conversion. Most car nuts will tell you that the most enjoyable part of owning a car is the process of attaining that certain level of perfection. And, in most cases, thoughts of selling come to mind shortly after that goal has been met